Join 3,118 other subscribers
Follow Poetry in Motion on WordPress.com

Hello fellow blogger friends! Every now and then I come across a piece that I find so fascinating, that I just have to share it with you all. This piece is amazing but be sure to follow the instructions at the bottom to get the full affect! Enjoy!!

Today was the absolute worst day ever

And don’t try to convince me that

There’s something good in every day

Because, when you take a closer look

This world is a pretty evil place.

Some goodness does shine through once in a while

And it’s not true that

It’s all in the mind and heart

True happiness can be attained

Only if one’s surroundings are good

It’s not true that good exists

I’m sure you can agree that

It’s all beyond my control

And you’ll never in a million years hear me say

Today was a very good day

**Now read it from bottom to top, the other way,

And see what I really feel about my day.

Hello all! Just want to share this awesome poem that was read during this morning’s church service. The author is unknown, but this piece is powerful. Enjoy!!

In dark and bitter cold;

Each one possessed a stick of wood

Or so the story’s told.

Their dying fire in need of logs,

The first woman held hers back;

For of the faces around the flame

She noticed one was black.

The second man looking all about,

Saw no one of his church,

And couldn’t bring himself to give

The fire his stick of birch.

The rich man sat and thought

Of all the wealth he had in store;

Why should his stick be used to warm

He gave his coat a hitch;

No way would he let his stick be used

By the greedy selfish rich.

The black man bitter and full of rage,

For all he saw in his stick of wood,

Was a chance to spite the white.

The last man of this forlorn group

Did nothing except for gain;

Giving only to those who gave,

Was how he played the game.

Was proof of human sin;

They didn’t die from the cold without;

They died from THE COLD WITHIN.

Here’s a lovely poem I came across by June Jordan called: Niagara Falls, one of my favorite places in the world. See my previous post http://sporterhall.wordpress.com/2014/07/03/did-you-know-7/ I added a couple photos to coincide with this beautiful poem that June Jordan dedicated to Leonard Bernstein. Enjoy! 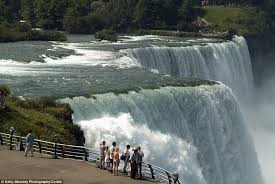 And in the first place the flowing of the river

and in the second place the flowing river

a breakneck cliff invisible behind

into spray that birds

attempted to delay by calmly

playing in the serpentine formations

of the frothing aftermath

and then in my place stood a fool

surprised by power that wins only

peace as when the sliding clouds collide

into a new perfection