This dream I had, was so incredibly real.

Just like hours before, your embrace I did feel.

You wondered why you feel,

the way that you do about me.

As usual, the answer,

was plain to see.

You told me you had,

such a strong urge to kiss.

We can no longer wait,

to unleash the passion we miss.

I awoke to realize,

it was all in my mind.

was not here for me to find.

A dream or not,

this happened for real.

I guess it’s a reminder,

of all the things for you I feel.

Just when I think I can’t fit one person more,

from ceiling to floor.

One more soul seeking desperately to fit in

from a trusted friend.

My heart is full and is sure to burst.

my lite’s motto and curse.

It’s hard to imagine leaving anyone out,

to love and to accept,

is what it’s really all about.

So my heart squeezes tightly

to make one more space.

For it is always open,

everyone has a place.

Imagine the world through another’s eyes,

those of a strange and peculiar one

that see things through a wider scope.

Where any and everything imaginable is possible.

New life born through those eyes,

that left you stunned and mesmerized.

through hopes and dreams now realized.

Imagine the world through another’s eyes.

Why don’t you take a minute and just say ‘hi’,

to the brother over there, barely draggin’ by.

Yeah, he’s beggin’ but don’t dog this brother out,

see, you haven’t got a clue as to what he’s all about.

You turned up your nose as if he were dirt,

he has feelings too, that you stomp on and hurt.

He has probably seen things that we can’t comprehend,

he has reached a rock bottom that doesn’t seem to end.

He’s only asking for a nickel or maybe a dime,

but you can’t spare a second of your precious time.

I’ll take a moment to stop and say ‘hi’.

It may cause this brother to take on a different view,

about the road he is on and what he should do.

Sometimes, the slightest gesture can touch a person’s soul,

and restore some of the joy that fate has stole. 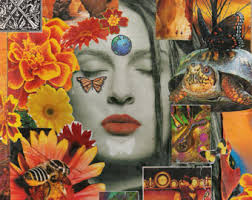 In the depth of slumber,

Aburst with a brilliance that burns slowly,

and without mercy, quietly and relentlessly.

Etching its presence deep within the recesses of the mind.

A smoldering reminder of the fine line

that exists between the conscience and sub-conscience.

seer their way through, blazing a fiery pathway

that leads deeper into this temporary place,

that only exists while asleep.

the unique tranquility of this colorful space.

gathers one securely in its clutches.

in an undetectable disguise.

Terracotta dreams will overtake you,

the moment you close your eyes.

This is a beautifully written piece which I have come to find is the norm from my friend Ishan. I would like to share its beauty with my followers. Enjoy!

Gringa of the Barrio

A Sassy Barrio Gringa Telling It Like It Is